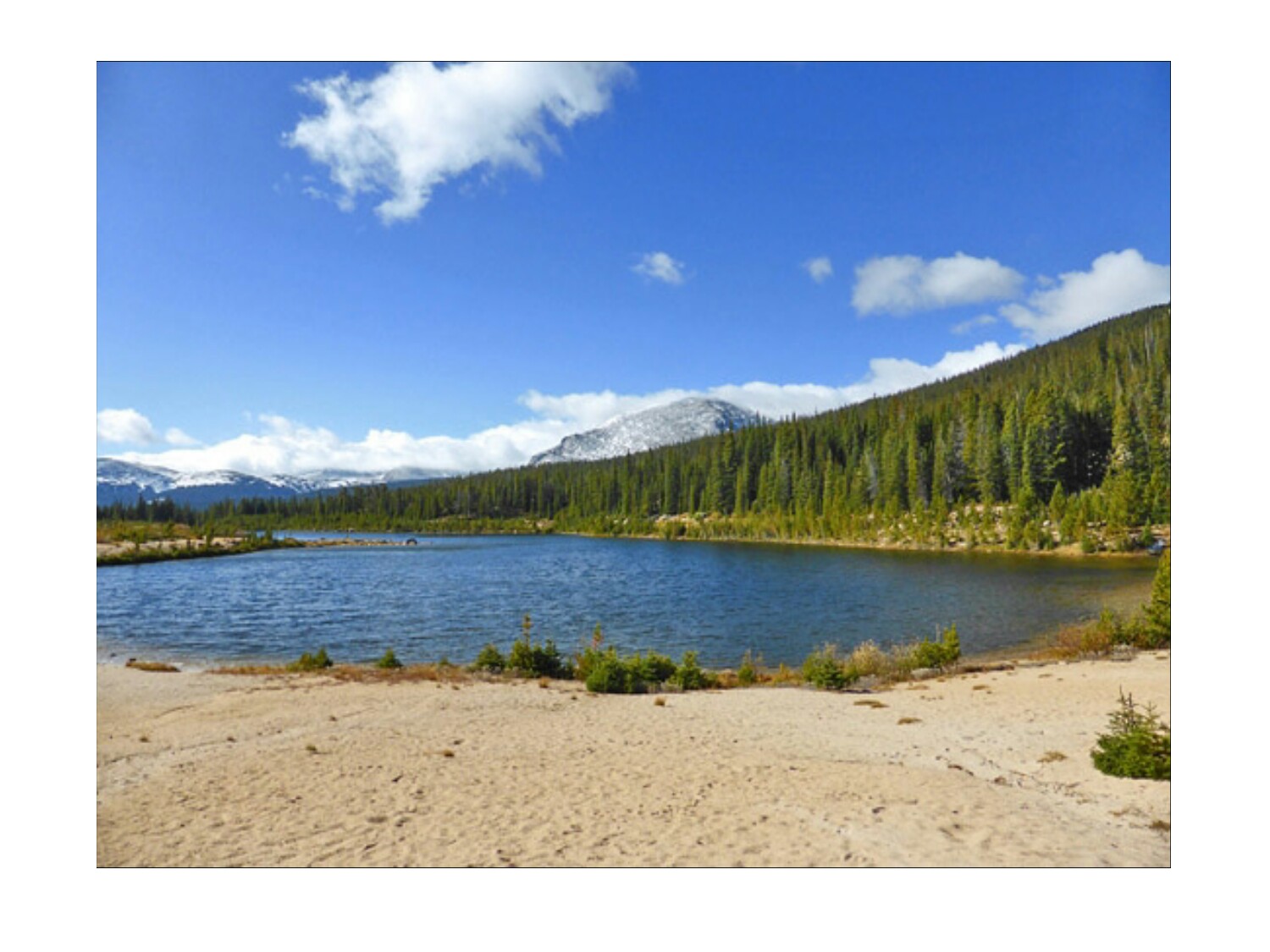 After moving to Colorado in February of 2016, we were anxious to spend our first night out in the wilderness backcountry camping as official Colorado residents! For me, it would be my very first backcountry trip ever, and as for Matt – he couldn’t say the same. He left the destination of the trip up to me this time, and I of course was searching the map for any sign of water (Aquarius – represent!). Sandbeach Lake: north of Nederland, 8.8 mile round trip, backcountry camping – sounded good to me!

This would also be the very first time I was completely loading up my brand new pack, sleeping bag and all, although it was extremely gracious of Matt to take the heavier 0° bag and let me carry the slightly lighter 20° one. My bag ended up weighing in a little over 30 lbs and Matt’s nearly 50 lbs. Mine was definitely a load, but didn’t seem like it would be too bad!

We started the trail at Sandbeach Lake in the increasingly warm sun, with close to no other hikers in sight. It was a beautiful sunny day with a cool breeze. I was starting to remove layers early on in the hike with much shock at the warmth and dryness April was already bringing. No. snow. in. sight.

I was definitely getting excited at how well I was carrying my new pack with all my different weather gear! Until — about a couple miles in we passed a couple of hikers, maybe in their 50’s or so, with trekking poles that casually warned us of the snow ahead. No problem, we thought. Must not be THAT bad if THEY are coming back from it just fine, considering their age and all…

So we kept hiking, and sure enough ran into that snow they were talking about. DEEP snow too. It seemed to have almost come out of nowhere! The path itself wasn’t even in visibility, but we decided to not let that deter us and kept going. Luckily, with the slight openings in the trees and a previous snowshoer’s faint marks on the ground, we had enough faith that we could still find our way to the lake.

Step after step, we continued to fall through the snow; it often was reaching up to our mid thighs! At this point it was getting quite tough and quite tiring, but also made for a fun challenge! With even less faith now of ever making it there, we for whatever reason persisted. This 4.4 mile one way turned into a near 5.5 hour trek into the unknown.

But alas, the snowshoer didn’t lead us astray after all! We found ourselves right at the mouth of what must have been Sandbeach Lake. With my ignorance, I still expected to actually see a lake; instead, snow covered everything in sight. However, it was FAR from a letdown! The stillness, remoteness of location, and breathtaking beauty of this snow-covered winter wonderland far exceeded my expectations. It was absolutelybeautiful. . .

After that long, tiring journey I was ready to not move for a bit. We were able to find a front and center spot by the lake in a couple of trees next to each other to sleep near. The only, I repeat only, patch of ground in sight that wasn’t covered by snow just so happened to be the perfect place for my hammock to be set up over. Matt didn’t get as lucky with his spot, but he didn’t seem to mind much. We set up our hammocks and rainflys, chowed down on what we wished was a hot meal, and then collapsed. As night hit, we were bundled up with every last warm layer of clothing and feet warmers that we had. It was a coooold cold night, but we made it through.

I was waking up here and there throughout the night due to the coldness, but was also restless with images in my head of marmots, bears, and other wild animals nibbling on my fingertips that were sticking out of the hammock – I hadn’t even heard about mountain lions at this point, but was definitely glad looking back that it was one less thing I had to worry about!

It didn’t help that my mind was probably drawing this illusion of nibbling animals from an actual real-life event: There is a duct taped patch on the top of my sleeping bag from a marmot that tried chewing a hole through to get to a food wrapper inside! I was luckily not the one using it when this happened, but am apparently living with the PTSD every time I use it now! Ha. I now know why it is so important to eat food far enough away from your sleeping area and to never leave wrappers behind either – the physical reminder of the duct tape won’t let me forget ever again!!

The next morning we were dreading our hike back. Expecting the trip back to take just as long, we rose with the sun, took down camp in the bitter cold shadows of the hills, and were on our way. I had to work in Denver at the salon that early afternoon and we still had the whole exhausting hike back to the car, 1.5 hr drive home, and showering/getting ready part to do. Yep, we’re crazy. We also only had one cell phone with us to use for the time, and that was on its last leg of battery. The fear was definitely settling in.

To our surprise, we ended up actually having a slightly easier time avoiding a lot of the fall-through areas in the snow and shaved off maybe an hour or two!! We realized that the early morning snow-covered ground was still frozen enough from the night before to withstand our weight, but that once the hot Colorado sun hits it for a bit it will start to soften and therefore we would fall through. We continued to tread lightly and quickly, and were able to estimate the time with the handy fingers between the sun and horizon line trick to be confident we were staying on track. I was able to validate with the phone once or twice before it died that we were.

We finally made it back to the car, home to shower and get ready for work, and arrived on time to start my day of clients by the early afternoon – Boy, did I have quite the story to tell of the most eventful past 24 hrs leading right up to the entrance of the salon doors!? I almost felt as if I was just telling a tale from a foreign land, so opposite of the indoor city life. There was definitely much to reflect on here.

After the longest, most exhausting, and coldest yet most beautiful backcountry experience out at Sandbeach Lake, I realized: If I can do that, I can do anything!!!

Sometimes those hard and treacherous experiences are the most rewarding! I am so thankful for challenging myself to see what I’m made of, and now I feel the drive to not stop here!

We plan on returning when the snow is gone to see what was hiding just beneath us that weekend that we couldn’t see! Here is the website’s trip report info with more pictures:

I encourage you to go check it out for yourself! Or maybe there is a nearby conservation site or park you have yet to check out? Don’t let the weather stop you!! Chances are, you’ll end up having quite an experience with stories you will never forget to tell :).

What kind of adventures are you going to have? What’s stopping you from going out to explore the unknown and resurfacing your inner badass?